My name is Dr. Graeme Fraser-Bell, I was born on The Wirral, lived in Newcastle-upon-Tyne, Oxford, Wirral, Johannesburg and Oregon USA. I’m married to Daphne who is from The Bahamas. She amazingly decided to come and live in the UK with me. I love travel, fine dining, fine wines and wish I didn’t have beer money for champagne tastes.

I retired from corporate life in 2012 and was hosting a dinner party at my house for family and friends. Messing about with accents and quotes, I asked my sister, Fiona, to repeat a quotation in her best French accent. But all of her accents are Welsh-Indian hybrids with hilarious results. It was that epiphany that made me think about a game based on accents, had anyone done one? Could you make it entertaining? And how on earth do you convert an idea into a practical game reality? That’s where the journey started. It’s been a steep learning curve ever since.

You have a PhD in Asymmetric Organic Synthetic Chemistry and an MBA. I think the chemistry background clearly influenced FReNeTiC and an MBA clearly helpful in running a business. How else has your background impacted your games and Accentuate Games Ltd?

You really have done your research on me! I was formerly a VP and co-owner of a high technology battery materials supplier. Fortunately, having sold out my shareholding to provide a nest-egg,  I was positioned to enjoy my early retirement. This was so useful in allowing me to self-finance the IP, design, and production of our first game, Accentuate. Without that, I don’t know how people manage to get their game ideas off the ground. I have huge respect for those successful self-publishers.

Having travelled extensively throughout the world, I got exposure to many different languages, dialects, and accents. That’s where those life experiences came together with the accent fun at the dinner party that catalyzed my game. My international business experience and MBA certainly helped in preparing a business plan. It raised more questions and challenges and helped to systematically create a pathway to get Accentuate to market.

Unless you are Cards Against Humanity you can’t build a sustainable games business based on one game. I knew we needed a second game. But our second game needed to be developed with intent. I read about the experiences of Alfred Mosher Butts, the inventor of Scrabble and was then inspired with the intent to create a word game. But how does a lapsed scientist create a word game? Then I remembered the saying ‘your school life stays with you all your life’. What aspects of my education could create a foundation for a word game? Physics? Maths? Chemistry?

How about the Periodic table, 118 element symbols, how many words can be created?  After some research, I realized there are >25,000 words that can be created, but as always with word search games what novel scoring system could be used, it was right there in front of me, use the Atomic Number of the element symbol being used, therefore Ba + Na + Na = Banana = 78 points. So yes Accentuate came about from my travels and experiences and FReNeTiC was derived from my former studies.

What was the impetus to go beyond casual interest in this hobby and become a game creator?

Accentuate Games Ltd was formed in October 2013 to commercialize Accentuate. Prior to this, I knew absolutely nothing about the games industry and at the age of 50, having just retired, the thought of starting from scratch in an entirely unrelated industry filled me full of dread. But I also realized what a fun, engaging and satisfying journey it could become. Instead of working with $36B corporate gorillas, I was going to be creating, fun, engaging and entertaining products to sell primarily to the British public. That didn’t sound so bad at all. We all get moments of what I call ‘The Tingle’. You just know something is right, that it will work, and you will do whatever it takes to get that idea, product, innovation, etc off the ground and that’s what I felt with Accentuate.

There is no substitute in passion, drive and a single-minded belief that is so essential to create the resilience needed to convert those ‘Tingles’ into reality. I had lived in S. Africa, suffered the strains of completing a D.Phil in 3 years at Oxford, worked in the industry in Liverpool, and transferred to the USA as a young VP. How difficult could launching a game be? So I went for it.

I haven’t played Accentuate but I’ve played FReNeTiC a number of times. Surprisingly that game allows children—and others without strong spelling/vocabulary—can still do really well at the game. Short words still have the potential to score high. Aside from your chemistry background, what inspired this game? Is it coincidental that those of varying skill levels can still compete without it being grossly unbalanced?

That’s exactly it. From the outset, I was acutely aware that I wanted this to be a mass-market appeal game and not just appeal to scientific geeks. I wanted the whole family to play, for kids to be playing with their grandchildren. The timer was introduced to level the playing field between the Scrabble experts and novices, as it introduces an element of stress, it’s all about writing down as many short words as possible within the 45 seconds allowed. Anyone cogitating to form a clever long word will invariably time out and score zero. It is a great leveler and it’s also about emotions. I love to see the emotions on kids’ faces when we are demonstrating the game when they suddenly realize they can create words from the elements and take on their parents.

For someone who was educationally challenged and failed his 11+ miserably, my proudest moment was probably achieving my Doctorate in Organic Chemistry from Oxford. I then went from that high to the low of managing a factory workforce in Liverpool which was one of my least proud moments as a grossly inexperienced manager and leader. But we learn more from our failures than we do from our successes and that helped in future years to allow me to secure three Queens Awards for international business. The proudest moment after retiring was seeing Accentuate on the shelves at John Lewis & Partners and demonstrating the game to customers and seeing their genuine enjoyment and fun in playing the game.

Never underestimate the resilience you need to succeed in this or any other business. But especially when you are creating your own games brand. There have been so many knock backs and failures but I learned from every one of them. If the game was rejected by a customer, distributor, licensee, etc, drill-down and find out why. Understand and objectify it. Take the emotions out and, most importantly, learn from it. Change something to increase the probability of success in the future. If someone writes a 1* review, that’s so much more powerful than a 5* review in terms of fine-tuning and improving the game.

If rejected by a distributor or High street target I always tried to think of this not as a rejection of the game but of the ‘fit’ of the game within their offerings. Twenty-five years of international business and the relentless failures in chemical research are powerful training grounds for developing armor-plated resilience to setbacks and rejections.

We find this a useful starting point in approaching people during our demo days, perhaps asking them what they bought last Christmas, what genre of games do they like, engaging with them helps to understand their preferences, if it’s a fun party game then its Accentuate, if they like word games it’s FReNeTiC and if they slant towards strategy games it’s Rats to Riches. In this way, we don’t switch someone off straight away by trying to demonstrate a party game to a hobby gamer.

Risk, as that was my childhood go-to game, definitely a pack of cards as there is no other game package that packs a vast multitude of varied games and Where is Moldova out of respect for Peter Seager my first mentor in this industry.

There are game inventors and companies who work on the basis of ‘time pacing’ where they have to launch a set number of games in a specific time frame. Then there are those like me who are ‘event pacers’. I won’t create or launch another game unless it has truly triggered that ‘tingle’ in me. We have seen that launching another game just for number’s sake has a dilution effect. I am happy we are now covering all of the three key game genres.

With Rats to Riches, we have also secured our first gold medal. We are actually working on some novel expansion packs for Accentuate, add-ons for FReNeTiC such as a sounding timer and some add-ons for Rats to Riches. But no new games in 2020. We have far too much to achieve in terms of domestic expansion and, more importantly, international expansion of the three games we now have out there.

Ephraim Hertzano the inventor of Rummikub. Look at the experience that man has amassed from creating that one blockbuster game back in the 1940s.

I believe we all have a game, a book, a product, etc in us but so few of us sit down, immerse ourselves in that idea and produce something on the other side of that creative boundary that is a workable solution. There is no feeling like that of converting an idea or concept into a product that you are proud of and that people want to buy off a retailer’s shelf and then tell you how much they enjoyed it.

Don’t be a shoulda, woulda, coulda, it’s a bit of a cliché and a well-used tag line but Nike’s ‘Just do it’ speaks volumes to me.

I’m pretty sure there is deep and profound wisdom in Graeme’s words to us today. Aside from the obvious “get on it!” message, what I’m really hearing is more subtle. No matter what your background and current occupation, you can apply them to something completely new. That’s the message to tell your inner-critic. I’ll hazard a guess that when studying chemistry Graeme never thought, “this would make an exciting tabletop game!”

However, to echo Graeme’s final Nike invocation, I’ll leave you with a quote from Nolan Bushnell, founder of Atari. “Everyone who has ever taken a shower has had an idea. It’s the person who gets out of the shower, dries off, and does something about it that makes a difference.” I can’t find a definitive source for that quote on the internet. But David Goldsmith uses the quote in Paid to Think. 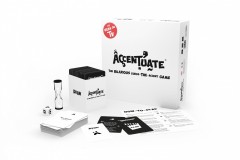 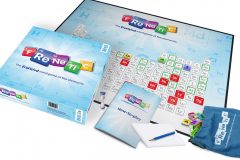 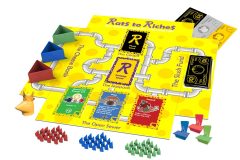