As a child I was always drawn to the absurd stories featured in fictional news tabloids like the Weekly World News. Cows born with two heads! A vampire boy discovered in a South American cave! Elvis Presley is alive and working as a garbage man! There was never a shortage of outlandish news. When I stumbled across Sentient Cow Games‘ new game, Escape from Dulce, I was instantly taken back to my childhood. They had it all: the vibe, the pop culture references, and even the two-headed cow (aka Snippy von Bell)! They were able to stitch together these elements into a streamlined and enjoyable dungeon crawler. Now in a world where real news is the fake news, it’s time we delve into an escape…from Dulce.

You have just awoken from a cryopod deep inside Dulce Base. Your team will need to band together to battle your way through six levels of the base. You will level up your characters and collect gear by battling enemy aliens, guards, robots, lizard men, and mutant hounds. Furthermore, you will find yourself battling a boss on each level of Dulce. Just like any good platformer video game. This game’s final boss is the mysterious Man in Black. Simply put, Escape from Dulce is oozing with nerdy sci-fi references.

The Game (a high level view)

Too often, a potentially great game is reduced to just good because of downtime in between turns. Sentient Cow has reduced that threat by a streamlined turn order. On any given turn you decide who will enter the room, populate the baddies, roll for initiative, and then, engage! After combat is over you receive experience points—more for anyone who landed a killing blow—and loot the room. During the search you are not only looking for gear but also for the necessary computer terminal and portal that allows you to advance the next level.

Another thing Escape from Dulce has going for it is the theme. This game is heavily thematic and the sci-fi references, Weekly World News nods, Area 51/government conspiracy theories, and characters are tied together wonderfully. The art is also perfect for the theme.

Also, the three-dimensional playing area is a nice touch. This is not something that was necessary but it helps this game stand out and become even more memorable. Even packing the game away is like a fun little mini-game!

But most of all, the combat is simple and straightforward. I’m from the old school world of AD&D (though I do love 5e too) where you needed fistfuls of dice to resolve an encounter. Escape from Dulce satisfies my desire to chuck dice. There are 15 total dice to use but you won’t necessarily use them every turn. Depending on your character or your chosen action you will choose from stat check, melee, ballistic, alien weapons, experimental, or psi dice. The combat trackers used in this game are clever, simple, and incredibly useful.

Be careful when advancing through levels. Due to the random nature of how each level’s rooms are populated with objective tokens you may find them on the first couple of rooms you encounter in a level. At first glance this may not seem like a problem but remember you need to level up your character in Escape from Dulce to be more successful in later levels. If you blitz through the early levels you may find unwinnable challenges in the later ones. That’s a hard disadvantage to overcome. So stay true to the type, and crawl this dungeon looking for experience and resources. You’re gonna need it.

Escape from Dulce is a solid game with good components (lots of them) and a great theme with nicely-matched art. The replayability ranks high on the scale thanks to 8 playable characters, two campaign modes, and expanded Secret Missions (more to follow). It is great for a game on the lighter side of long-session dungeon crawling. This is not the game for limitless roleplay options (go play D&D instead). But when you want a streamlined and heavily thematic dungeon crawler, Secret Unknown Stuff: Escape from Dulce is a great place to start! 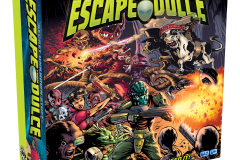 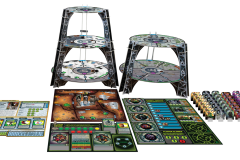