In a previous interview with Sentient Cow Games, Philipp Praeger suggested in the comments that I interview Sean Äaberg and Eric Radey from Goblinko and lucky for us, Sean agreed! I enjoyed my exchanges with Sean a lot. He is circumspect. He is certain. But more than anything, he’s genuine and he’s clearly tough as nails. He damn sure doesn’t sound like a man who’s recovering from a severe stroke!

My name is Sean Äaberg, I’m a professional artist living in Portland with my wife & three kids. I’m from Oakland, California. I enjoy music & nature, but I’m particularly a recovering workaholic & I’m trying to do other things again. I also had a severe stroke last September so I have been recovering from that with the tireless help of my wife & the real head of GOBLINKO – Katie. Also, my first art book, ACID VOMIT, comes out at the beginning of 2020.

I started playing role playing games with my buddies in middle school. I was attracted to the visuals of the original Advanced Dungeons & Dragons before I could even read.

Creating stuff is just second nature to me, so creating a game was an obvious choice. It didn’t hurt that the hobby has really bloomed.

Goblinko looks like an all you can eat buffet of punk! What drives your chosen aesthetic? It very much reminds me of Rob Zombie’s art!

Originally I was driven to the aesthetic just because I loved it. Then I started to feel like I had to carry the torch for it.

Can you tell us more about Dungeon Degenerates? Did you get the inspiration for it the same place you got much of Goblinko’s inspiration in general?

DUNGEON DEGENERATES came about in 2007 or so specifically because I hated the art for Magic cards & for the new (post 1980) D&D stuff in general & the hobby contained nothing of what attracted me to fantasy gaming at all. So in this way the aesthetic comes from a similar impetus but is different enough to represent a big change for the company.

I think becoming part of the fabric of people’s lives has been my proudest achievement & inspiring others to create isn’t shabby either.

Teaming up with or employing unreliable people has been the low-point. I have learned to have a more intense vetting process from this & honestly just listen to my wife on this if not hand it over to her entirely.

It obviously depends on the person but the original TMNT rpg is cool & I loved Castle Risk a lot.

Jason Fairclough who sculpts our miniatures & has his own game WASTEMAN. I’m also impressed by the outputs of the band GHOUL.

Sean is a man who knows what he likes and makes no bones about it. If you like Dungeon Degenerates then definitely keep him on your radar. He’s got some interesting projects in the works and I’m looking forward to seeing him deliver them all. This is the finest recovery from a stroke I have ever seen. He sounds busy but he doesn’t sound overworked. Much respect to you, Sean! Best of luck. 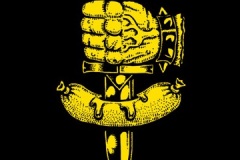 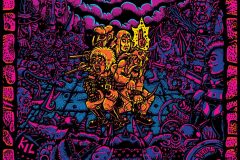