Another suggested interviewee from a previous interview (with Sentient Cow Games) was Nate Treme of Highland Paranormal Society. There were a few things that intrigued me about Nate. One of them being that his site immediately reminded me of the old Pinkerton’s Detective Agency logo (at right). A second intriguing bit was the steampunk gorilla selfie he uses on his About page. I felt like I’d been referred to someone who is interesting even outside of tabletop gaming.

Let’s take a few minutes to get to know him a little better and see what he’s about.

I’m Nate Treme. I was born in Florida,  grew up in mostly in Mexico but now I live in the Highland neighborhood of Shreveport, Louisiana with my wife, 2 kids, and 2 cats. I like drawing, making music, watching movies and playing games.

Friends in college invited me to play with them. I’d always wanted to play D&D but never had the opportunity before that. I first played D&D 3.5 but really got into it more with 5e. Then I discovered OSR/DIY games like The Black Hack, Knave, Into The Odd and got hooked on making my own games and adventures.

Can you tell us more about Highland Paranormal Society? Are your games and adventures as light-hearted as some of the art for them suggests?

Highland Paranormal Society is the brand I publish games under. I started putting it into artwork I was making and I was selling posters with that name on it. When I started making RPG stuff I just kept using it. I try to make tabletop role-playing games that are easy to pick up and run. I don’t have a lot of time for gaming so I need games that I can fit into my schedule.

I don’t know if all my adventures are light-hearted. Sometimes I combine grotesque or horror content with cute images. I just put an adventure on Patreon with Pig Fiend monsters and I think the accompanying illustration is pretty cute. In The Primeval Holt Of The Elk Lord you can encounter cute humanoid flowerfolk and a unicorn but also you can get sacrificed by cultists or eaten by giant ants.

I do that with every hobby I think. Music, art, food. I like to create things. Tabletop role playing is an especially creative hobby though. It’s hard to participate without creating something. There’s such a great community of creators self-publishing books and zines that it’s hard not to get inspired to try it yourself.

Someone told me that my game, In The Light Of A Ghost Star, was their first time running a game for their friends and that it was the perfect intro to the hobby. That was cool to hear. And a few folks have said my games inspired them to make their own. That makes me very proud.

Sometimes I get down because I can’t participate in the hobby as much others seem to. I would love to join in on many of the game sessions and playtests I see online but I just don’t have the time. It’s easy to feel left out on the internet but it’s good to remember that the internet is mostly fake and most people probably feel a little left out as well.

Right now it’d be Tunnel Goons, because I think it’s easy to pick up and I need to playtest it more.

If not one of my own games, it would Troika, Knave or Into The Odd. The rules are light and they don’t take long to get up and running. Also Mario Kart 8, for the same reasons.

I’ve got a couple zines in the works. I post at least one adventure a month on my Patreon. Look out for an expanded version of Tunnel Goons and a new edition of In The Light Of A Ghost Star.

There are too many to pick one so here are some upcoming projects I’m excited about and the people creating them: Lorn Song of The Bachelor by Zedeck Siew, Troikahearts or anything else Fiona Geist is working on, The Forest Hymn & Picnic by Cecil Howe, Swyvers by Luke Gearing.

From my many email exchanges with Nate and what I’ve learned from of him through this interview, he sounds like a fun person to hangout and engage with. I’d be down to sit and play some of his own games or even Mario Kart 8. I love his style of juxtaposing cute imagery with grotesque/horror plot lines. Sounds like loads and loads of fun to me! Be sure to visit his site. He’s got a lot of great content, much of it for free. He’s also published a lot of content on DriveThruRPG. 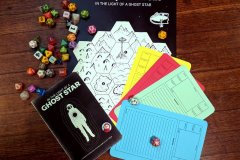 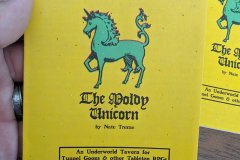 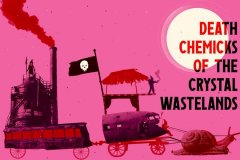 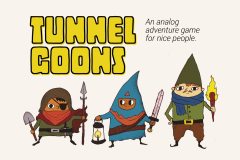 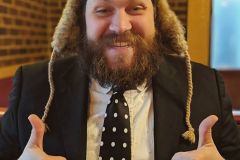