Around the time I founded NonZero Sum Games I started noticing The Pickled Dragon on Instagram. Sometime later Matt Rauscher (the genius behind The Pickled Dragon) published Days of Blight: An Offering of Innocents on DMs Guild and I got a copy of it. It was fantastic and from that point forward, Matt and I had what I’d consider a cordial internet friendship going on. He is a wonderful creator and all around good guy who has given me tons of advice on things even outside of tabletop gaming. Read on to see what makes him wonderful and how he got the chance to DM for such people as Joe Manganiello and Luke Gygax (yeah, THAT Luke Gygax) and how a freak accident recently left him paralyzed from the chest down.

My name is Matt Rauscher and I am from Illinois where I live with my wife and kids. I am currently recovering from a broken back which has landed me in a wheelchair but I have hopes of walking again. Prior to the incident, I enjoyed writing short stories, watching Wes Anderson movies, and finding every excuse imaginable to take a trip to New Orleans. My wife and I were literally a week from selling our home and moving to the Big Easy prior to my injury.

Shortly after AD&D was released my brother and his friends picked up the three core 1E books and the World of Greyhawk setting. He would come home and regale me with stories of his adventures and I so badly wanted to join in.  Sadly, I had one big problem, I struggled terribly with dyslexia and was too embarrassed to join a game where reading and writing were critical.

Luckily for me, my parents noticed that all of my free time was spent with my nose in those three core books. I would make up stories about the pictures I saw or imagine my own heroes fighting the monsters I found in the Monster Manual. In those days there was limited help for people with learning disabilities but integrating gaming into my program was just the inspiration I needed to work hard and overcome dyslexia. It also didn’t hurt that my parents promised to get me any D&D product I wanted provided I read and used the material!

Dyslexia still crops of from time to time. Mostly when I am not concentrating or trying to rush my writing. That said, I give Dungeons and Dragons credit for giving me the tools needed to succeed.

Whether it’s for D&D or just short stories, I spend an enormous amount of time writing. In the early 2000s, I began to create binders for my players with descriptions of the world and cinematics of events for reading on days that we were not gaming. My wife would edit the cinematics and encouraged me to put some of my adventures together and publish them. From her encouragement the Pickled Dragon was born.

How is it that you came to DM for such notables as Luke Gygax and Joe Manganiello?

I think it was around the fall of 2017 that Joe and I began to talk gaming over Instagram. Sometime during those conversations, we discovered that we were both attending Gary Con that March. We planned to game together but as fate would have it, Joe came down with the flu that week and didn’t spend much time at the con.

Shortly after Gary Con, Joe texted and invited me out to the Stream of Many Eyes that June. Saturday night, after the steam, we planned to have that game we missed in March. Luke Gygax happens to live in Los Angeles so we invited him to Joe’s place for the game as well. Many monsters and bowls of Doritos were slain that night…the horror.

What is your favorite edition of D&D and why?

I am still a fan of AD&D 1E. I like the fact that most classes have very few defined abilities. If you want your character to become an expert herbalist, they should find a mentor, spend downtime in the library learning, and actively applying the knowledge. The same applies to combat. Want to develop special maneuvers or create your own signature spell? Work with the DM and make it part of the development of the character rather than just something you get because the book said so.

What is your favorite adventure module of any edition?

Hands down, The Village of Hommlet. Inside of 24 pages you have a village full of interesting NPCs, a ruin to explore, a dungeon crawl, and hints to a greater threat to come (Temple of Elemental Evil). I love how the villainous mastermind, Lareth the Beautiful, is described as the dark hope for evil and is an agent of the Demoness Lolth. The genius (on the part of TSR’s writers) of Lareth’s evil plot is that it has threads to so many classic 1e adventures.

Few things bring me greater joy than developing a truly sinister monster. So, when I had a chance to work with Kelsey Dionne on a monster manual of our own, I jumped at the opportunity. Collaborating with Kelsey was an absolute joy. We have very different writing styles but the two meshed together to create something greater than its parts.  In the end, we had an incredible time creating the 70 monsters and 4 playable races of The Monstrous Lexicon.  Even better, we self-published the book allowing our work to appear in print on Amazon and Barnes and Noble.  We also put a digital copy on DriveThru RPG.

Bears Head Miniatures has been working with me to create a line of miniatures for The Monstrous Lexicon. Series 1 completed its first Kickstarter with more to come!

In early August I broke my back in a freak accident leaving me paralyzed from the chest down. Although I am paralyzed, I still have serious bouts with nerve pain limiting my computer time and throwing a wrench in my creative process. Adapting to life as a paraplegic is an ongoing challenge but I have found that fighting back with humor and a positive attitude has helped me find new ways of igniting that creative spark.

What advice would you give to aspiring RPG creators and DMs?

The first thing I would say is that creating an adventure or supplement for public consumption is very different that DMing. DMs need not stress about every detail and can improvise their adventure on the fly. Creators should provide enough details to satisfy the majority of the people who purchase the product.

The most important piece of advice I can give creators is to play test as much as possible. Then when you think you have tested enough, test again. There are a vast array of ways for players to break encounters as well as entire adventures. As a creator, you want to close as many of those holes as possible.

DMs have the luxury of shaping their adventure as events happen and they shouldn’t be afraid to do so. Be flexible and know your players.

Dungeons and Dragons is the easy answer, using the 5e rules in the Village of Hommlet setting. However, for a slightly more interesting answer, I think I would play something like Dead of Winter with the betrayer mechanic.  Adding the betrayer would teach a new player that the motivations of their character may not align with another. All the better if the new player were the betrayer! Further, crossroads cards offer just the right amount of “roleplay” options to introduce a new player to the concept of putting yourself in someone else’s shoes.

If I am heading to a chum’s house, I would probably bring three board games. That said, I would try to bring three games that would hit different notes to cover all moods. The first would be Zombicide for some mindless cooperative zombie slaughter. Next up, I would bring Pandemic: Fall of Rome to fill a strategic niche while still remaining relaxed and cooperative. Lastly, I would bring Alien vs Predator: The Hunt Begins 2e for no other reason than it was a recent gift to me and I want to try it.

I should add that if I am heading over to my good friend Lord Byron’s house, I would likely bring War of the Ring as he is my partner for that game.

Prior to my accident, I had a number of projects in the works. Working collaboratively with Printable Scenery and the Architects of Destruction, I have been writing companion adventures for their fantasy terrain. One adventure, The Evil of Clorehaven was complete and ready to publish when I went into the hospital. I hope to swing back around to the adventure and get it on Amazon and DriveThru RPG soon.

The third book in the Days of Blight Trilogy is just about finished but still needs extensive play testing. The first two books in the series are on the DM’s Guild. I may also sell a single volume that includes all three adventures down the road.

A good number of people have approached me about doing some kind of podcast. There are so many out there that I initially was wary of the idea. However, during my three-month hospital stay I had ample time to think about the project and decided that it may not be a bad idea if it were a YouTube vlog and completely unscripted. Since my discharge, I have been working on The Pickled Dragon Unscripted and hope to roll something out soon.

Lastly, work has begun on another Monster Manual which may include new 5E classes. This project would fall into the months away column.

Without a doubt, you need to talk to Kelsey Dionne of The Arcane Library. She is an incredibly talented creator and deserves the attention.

Final Words on The Pickled Dragon

Matt is a humble guy. What he didn’t mention is that his wife setup a gofundme page to help raise funds to retrofit his Illinois home to be wheelchair friendly. As of this writing, Rebuild Matt Rauscher has raised over $14,000. While this is certainly worth celebrating, it’s only a little more than a third of her goal. If you are in a position to support him, please consider doing so. You can also support him by purchasing his existing publications or even sharing the links with friends. I own all of his current publications including a hardcover copy of The Monstrous Lexicon. They are great additions to your collections. And, frankly, I can think of few who are more deserving of our collective support than Matt. He may be a legendary dungeon master, but he’s mostly a great human. 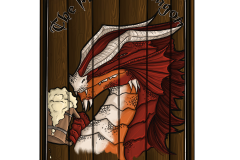 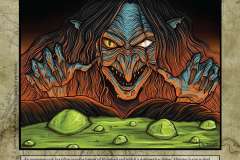 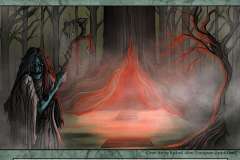 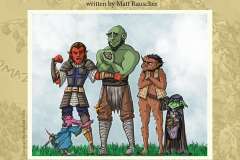 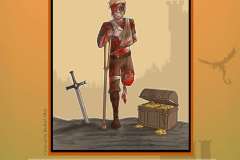 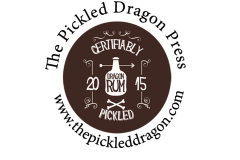