It’s exciting watching everyday people become successful in the tabletop gaming arena. As a child and teenager, I think I intuitively knew that a lot of designers were “normal” people. But this was prior to the internet’s ubiquity so no matter how humble someone was, they were elite to me. Aside from eroding the barriers to entry, the internet has also helped humanize creators and their businesses. None so much as the independent developers. I got to interview Chris van der Linden of Loresmyth and one thing is abundantly clear to me: he’s just a guy with the same apprehensions of “putting himself out there” creatively as any of us are. Read about his path from PC gaming to tabletop gaming and try not to identify with him. It’s hard not to.

I’m Chris van der Linden. I live and work from a small rural town in the Netherlands. After co-founding and running several companies in the PC gaming industry, I recently made the move to create roleplaying products fulltime with Loresmyth. I’m a passionate musician and played in a few bands. I also like painting, generally expressing myself creatively.

I remember seeing a game of Warhammer for the first time in a dingy basement at a local comic book store. The horde of goblin miniatures (metal at that time) I thought was mind-blowing. Of course, being a teenager I did not really have money to buy that kinda thing, but since I really loved the art style, the stories, and the appeal of tabletop games. A few years later I and my friends also picked up Magic The Gathering, I believe around the time of the Ice Age block, and I have very, very fond memories of that time. These days with the presence of the internet a lot of the mystery and feeling is gone in my opinion, but the opportunities for small companies like me to thrive are better than ever.

My first release (The Claws of Madness adventure) was done purely because I wanted to something in the vein of The Forge of Fury and similar nostalgic adventures from back when I played for the first time. I had no ambition to earn a living with it. The modest success of The Claws of Madness surprised me as I did not expect people to like it. Then, it wasn’t until the success of Remarkable Inns and some encouraging calls with the CEO of Nord Games that I really started thinking about turning Loresmyth into a real business.

What are your proudest achievements in regards to projects you’ve created or worked on?

The Remarkable Shops Kickstarter reaching well over $100,000 in funding blew me away. More importantly, messages from my customers and backers that let me know how much they like a product or the effort that has gone into it, makes me the happiest. Financial success is great (and needed to sustain a living) but ultimately there’s no greater thing than to know I have a small impact on someone’s roleplaying experience.

Yes, definitely. After some initial success, I clearly recall talking to Christoper (CEO Nord Games) that I couldn’t see this “RPG stuff” making enough money to sustain a living. He believed in the kind of products I was making and encouraged me to go for it. But it was really scary to do so. Trading a fixed monthly salary for something uncertain was a huge leap. On a more personal level, I was going through a long period of burnout where I found it very difficult to be there for my wife and kids, let alone, run a company at the same time. It was an incredibly challenging time for me and my family. They never knew what kind of man they would get that day. Mentally and physically I was drained. But life has no pause button so while I had to go and figure out what I wanted to keep, lose, or change, everything else kept moving on. I think coming out of it all, I’ve learned it’s very important to do what you love and its ok to take a chance sometimes. To embrace the unknown.

You have a new player, what game do you choose to introduce them to?

D&D for sure because it’s something people can enjoy for such a long period of time. It can bring lasting memories and create longtime friendships. I also think it’s great for people to use their imaginations in a time where your own imagination is required less and less. While historically I am a sucker for miniatures and terrain, I do feel that the “story” is the most important aspect of D&D and you can call me old school on that. Haha!

Magic the Gathering, HeroQuest and Dark Stories. I prefer games that are a little faster to play and offer something new every turn. I don’t consider myself a board game fan at all. Mostly because a lot of them are too long-winded, focused on gathering resources, and generally convoluted. I just don’t have the patience for those kinds of things. Also, I did not name D&D because I don’t believe I’d need to bring anything to be able to play. We can just play around a campfire just with our imaginations and have the best game ever.

Most of my time currently goes into creating the Remarkable Shops book. Being a small team, I really cannot do many things in parallel, so I kind of learned through trial and fire to not stretch myself too thin. That said, I always have a few product ideas brewing in a sort of conceptual phase. Whenever one of those starts to make sense and shape up, I can choose to run with it and plan a Kickstarter. One of the things in the forge is a new set of Dungeon Discoveries card decks.

I really like Dan Dillon (previously Kobold Press) but who has since moved to work at Wizards of the Coast. He’s a great guy and one of the more prolific writers that has helped build the scene. I also like to put a good word in for JVC Parry (Josh for me) a freelance writer who is making some waves on the DMsGuild. I’ve worked with him on a number of projects and he’s just a champ to work with. Companies looking for a reliable writer to create adventures, sourcebooks, and other D&D materials should be talking to him.

Chris hasn’t come right out and said so I think I’ll say it for him. Heed the siren call. If you have a passion project you’ve been kicking around for awhile, launch it. But also find your balance. Your project won’t launch itself—unless a competitor happens to launch a similar project while you wait—but neither will life slow down for you in the meantime. Fit the project into your life but don’t let it become your life. Chris had his doubts about doing Loresmyth full-time. Your own doubts, if you have them, aren’t a weakness. They’re what make you a conscientious human being and I applaud you for them. But I also encourage you to get going and create something.

Check out the typical quality of Loresmyth projects with these Remarkable Inns photos below. 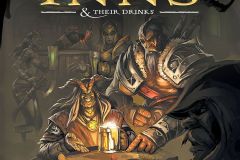 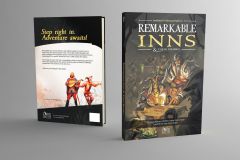 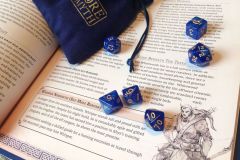 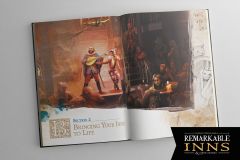 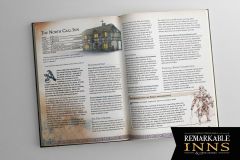 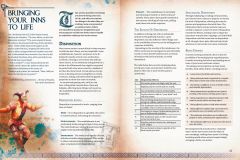 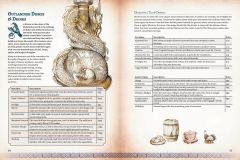