It’s no secret, I love D&D. However, I’m not a loyalist and I readily accept new RPGs any chance I can. In 2018, I chanced upon a Kickstarter for a new RPG that was dark and mysterious and doesn’t rely on the icosahedron. I jumped right in to support it for a hardcover copy of the core book. Looking back, I lament that I didn’t go all in with the add-ons. The custom dice, the GM screen, and the softcover adventure modules. Luckily, this stuff can be found over at Modiphius Entertainment. At any rate, I got my physical book and the PDFs and sort of love the whole Black Void concept. I reached out to the creator of Black Void Games for an interview which he readily granted. I wanted to know more about the game but, perhaps more importantly, more about the creator, Christoffer Sevaldsen. If you like tabletop RPGs or what drives people like Christoffer to create, please continue reading.

My name is Christoffer Sevaldsen, and I come from Denmark but am currently living in Singapore with my wife and three boys. Most of my time is spent on Black Void Games and my family, but I am trying to prioritise exploring this wonderful new place we are living in and connecting with people here. I don’t have or take enough time to read, but that is on my priority list as well.

When I was young, I saw some older kids playing D&D (the red box) in the hallways of my school and asked if I could join them, to which they luckily said yes. After my early induction into the wondrous world of D&D, I got into wargaming and expanded my range of RPG’s with Vampire the Masquerade, Call of Cthulhu, and others.

What was the impetus to go beyond casual interest in this hobby and create Black Void Games?

Becoming a creator is a lifelong dream that luckily got paired with opportunity for me. Like many other game enthusiasts, I always tended to make house rules and tweak settings to suit how I thought things should be. I remember having the bug even when I was young. Drawing knights, pirate ships or American civil war soldiers and making rules for how they would fight or do naval battles. So, I have clearly always had the bug of wanting to create games, if only for my own enjoyment.

In addition to me wanting it, there are some key elements that made me dare to take the plunge: an understanding and supportive wife—without her, I would not have been able to do it. Following Wade Dyer, as he did his Kickstarter for Fragged Empire made me think that maybe I could do it as well. Attending an event of the renowned Lewis Pugh offered me three takeaways that spurred me on: do not let fear inhibit you, discourage your own limiting beliefs, and do something now! Lastly, I found myself in a place career-wise where I had the opportunity to dedicate time to Black Void. So I took the chance and went for it.

I love the concept of Black Void the game. What inspired you to focus primarily on a D12-style system? Additionally, what inspired the setting and the lore within it?

The concept and lore developed layer by layer over the years. The initial idea was a cosmopolis and crossroads of worlds, and that is where everything else sprang from. The metaphysical concept of the Void, the horror aspect with the ghostly abominations, humans as refugees, the Unseen Rulers, the Mesopotamian influence, and everything else was introduced in stages along the way as inspiration struck.

There are various reasons that the D12 became the core of the system. From a practical perspective, the roll-range given by a D12 causes even low modifiers to make an impact on a single die-roll without dominating the roll or making it immaterial. This, in turn, means that character progression and circumstantial effects are relevant to action-rolls without completely overruling them.

Secondly, the possibility of exceptional rolls—either a natural 1 or 12—when using a D12 is ideal for how I would like dice-rolls to affect the flow of the game. It happens often enough to make it noteworthy and adds to the story without it becoming routine or overly dominating.

From a symbolism angle, the number 12 figures abundantly in myth. It is also features in numerous constructs and motifs of antiquity as well as in timekeeping and arithmetic originating from this era.

The inspiration comes from numerous sources. It can be traced to the various phases and passions in my life: my days studying philosophy inevitably prompted some of the metaphysical aspects of the game, while my fascination with the works of H.P. Lovecraft—particularly “The Dream-Quest of Unknown Kadath“—incited the horror and Voidfaring elements. My fascination with antiquity both historically and mythologically and a timely visit to an Abu Dhabi exhibit about Mesopotamia was key in tying actual historicity into the game, while my living in the Middle East undoubtedly inspired some aspects of Llyhn. The whole idea of humanity as exiles came quite late in the process but turned out to be the factor that quite elegantly tied all the other aspects together into a comprehensive whole.

What are your proudest achievements in regards to projects you’ve created or worked on?

Good question! I would say that Black Void Kickstarter funding at 218% by over 1000 backers is the crowning jewel. And while it is probably healthy to look back on achievements now and again, I am not one to rest too much on laurels, but rather look ahead at what is on the horizon.

I don’t know if I would say that there has been a specific low point. It has been a constant rollercoaster of exhilaration, extreme self-doubt, annoyance, joy, stress and everything in between. I feel that I have been fortunate so far in terms of how things have progressed for Black Void Games. So I hope I won’t see too much of a Karmic backlash in the future because of it! He he he ;D

In the story of Black Void, I think most of the low points come from internal factors rather than external ones. It has been a lot about me facing my own limiting beliefs concerning the quality of my work, being exasperated and frustrated about how long some things take, and so on. I have learned so much from this, and I continue to learn every day, which is how it should be.

My key takeaway from this is to trust my abilities, opinions and sense of quality while simultaneously understanding my limits. Learning to encourage positive behaviours from negative situations and stress is also a continuous work-in-process for me.

You have a new player, what game do you choose to introduce them to?

Hmmm… I would probably bring him or her into a game of Fiasco. I know that its simplicity and framework work well as an introduction for people who have never considered RPG’s. The hilarious concept and the minimalism of the game are ingenious.

I would probably choose mostly games that I haven’t played but really want to try.

Coriolis – The Third Horizon looks glorious, while the premise and setting seem to be just up my alley. It seems to provide a different take on the sci-fi genre, which is something I always find interesting.

I have had so many fun hours with Illuminati the board game, but sadly I haven’t played it in years, so that is definitely one I’d bring.

I supported the Dragons Conquer America by Burning Games on Kickstarter a while back but have yet to play it. So, I need to make this happen soon. It is a game that puts a new spin on things by introducing an unordinary setting and concept. I find that captivating.

For Halloween, we just released a free adventure called “The Flight from Salvation Square“, which I am really excited about. I am currently working on the next supplement for Black Void. It is a combination of source-material, a resource section, and the first part of a grand campaign to be continued in later releases.

Staring further into the future—I have a list of planned supplements and other interesting objectives on a note next to my scrum board that I am looking very much forward to diving into in the coming years. I do not want to reveal too much. Still, I can disclose that some of the supplements are focusing on the districts in Llyhn, while others explore the Cosmos and perhaps the deep places of the Void… Irrespective of which it is, I promise that each will contain a lot of treats for Arbiters and players alike.

There are some amazing creators out there, and I am not sure I can limit it to one.

I would suggest speaking with Marquis and Alexandru who are currently active on Kickstarter with their SCAVENGER 5E campaign setting. What they are doing is so evocative and captivating! I have been following their progress for a long time and was backer #2 and I am looking very much forward to receiving their end product!

I really like the take that Jon and the guys have with their “Dragons Conquer America” RPG (Burning Games). Having been in communications with Jon—I can say that they are great and helpful guys. Definitely have a talk with them if you haven’t already.

I get a sense that Christoffer has a deeply-ingrained passion for what he does. From what I’ve read in the Black Void: Core Book, I can personally attest to his attention to detail and immersive world-building. Be sure to follow us both on Instagram as we host a giveaway for digital copies of the core book, the soundtrack (yeah, there are great audio files available), and the When Darkness Falls adventure. I’ll provide the links for Black Void Games below the gallery. Our own are in the header and footer of this page.

Speaking of gallery, click to scroll through the high-resolution images of the Black Void: Core Book and GM Screen. It’s beautiful stuff. Be sure to drop some comments on creators/companies you’d like to see interviewed. It helps us out a lot if you include a URL in comment so we can find them quickly. 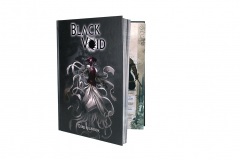 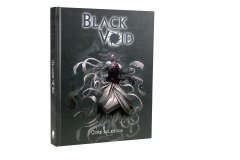 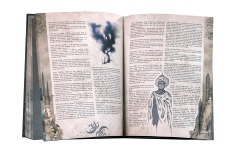 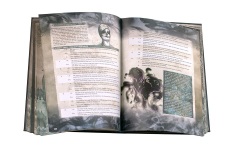 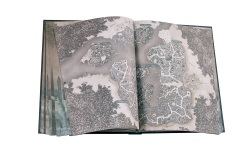 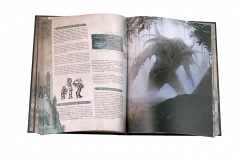 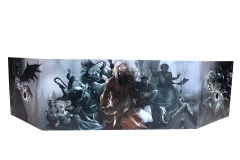 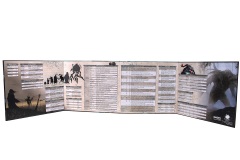